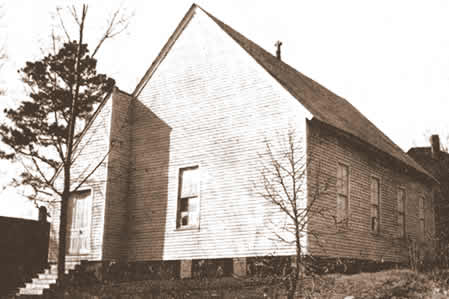 In the 1902 minutes of the First Baptist Church, Concord, N.C., is recorded the following: “It was recommended that a church be organized at the Gibson Mission (Gibson Mill Community). A motion was passed allowing the church, when organized, full possession of our mission property, provided they assume all financial responsibility.”

Out of this beginning the Second Baptist Church of Concord, N.C. was organized June 22, 1902, with twelve charter members. It was located on Beatties Ford Street (Freeze Avenue).

Upon completion of a new brick educational building in 1933, the old structure was torn down. A brick sanctuary was added in 1936, and that same year the church voted to build a parsonage on Kerr Street. Major renovations of the 1933 and 1936 structures were done in 1964 and 1975. In 1950 a recreation building was added. This building housed the first Child Development Center, begun in 1970. Today the 1950 structure serves as the Media Center, Sunday School office, and Youth Building.

In 1956 an educational building was constructed. In the 1960’s this building provided space for a Kindergarten for five-year olds. Today this two-story facility houses the church offices and educational classrooms. A new brick parsonage, located on Scenic Drive was built in 1964. The former parsonage on Kerr Street was used to house the minister of music and education until 1972 when it was sold. The Scenic Drive parsonage was sold in 1984, and a housing allowance was provided for the pastor and other staff members.

In 1990 a Family Life Center was built and the purchase of property on Poplar Tent/Crisco Road provided space for the Child Development Center to relocate. In 1997 the Child Development Center moved into the new well-equipped facility on Crisco Road. A ministry of the church, it provides good physical care, constructive growth experiences, and teacher supervision for over 200 children.

These photos are on the wall in the office hallway at McGill.

This site uses Akismet to reduce spam. Learn how your comment data is processed.